By a quirk of early season fixtures Gunnislake found themselves top of Division 6 East going into this match, despite a defeat last week at Grampound Road.  Unfortunately early season results and tables can prove a little misleading as this afternoon’s fixture was about to prove…..

The visitors to Hawksmoor were St Austell’s fourth team, a mix of older players and a good set of younger players.  Gunnislake once again found themselves with selection problems, with two late withdrawals due to knee injuries: an elderly Ian Dawe over-exerting himself in the Isaac Foot Cup, and a rather youthful Owen Patton, who apparently felt something go in the gym.  Enter the fray as last minute call-ups, Dave Warner and Luke Oxenham, borrowed for the day from Plympton.

It was a brilliant sunny day, but with rain during the week it was not clear what the wicket might do.  Nevertheless on winning the toss, Gunnislake skipper Kevin Beare chose to bat.  Little did we know it was the last thing that we would win that day.  St Austell bowled well, with a series of young seamers keeping things tight, and the more senior Williams bowling off-spin from the Village End.

But wickets fell regularly; only Stephen Lees made double figures and even he recklessly ran himself out.  St Austell did not refuse the gifts, took their catches well, and in the blink of an eye Gunnislake were all out for a meagre 72. 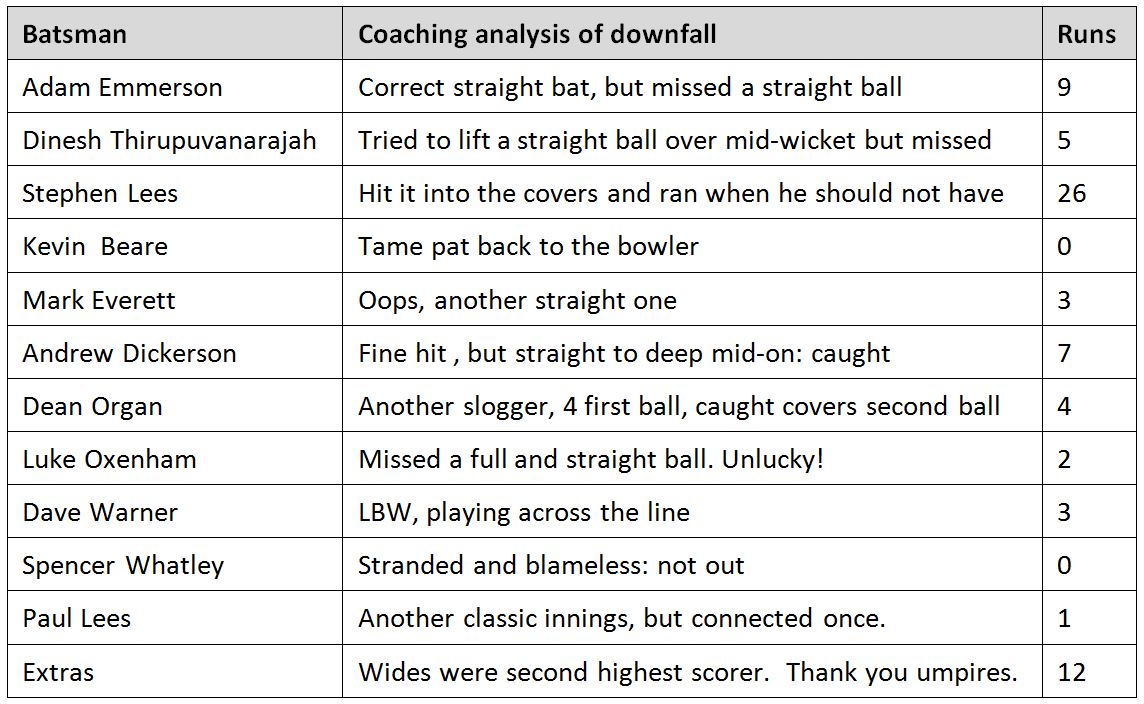 After a quick turn around and a pep talk from the captain we were off for the visitors reply. Spencer Whatley and Luke Oxenham opened the bowling and kept things tight initially.  Indeed Spencer had both openers bowled with the score on 7, and briefly there was a glimmer of hope.  But a  combination of youth (Toby Clarke) and experience (captain Matthew Nile) serenely motored past the Gunnislake score, in a little under 16 overs, to leave St Austell comfortable winners by 8 wickets.

And so Gunnislake’s brief seven days at the top of the table were over, and the comfy realms of mid-table once again beckoned.  But there is the making of a good team here, if we can achieve more consistency in both team selection and in our batting.  There is still time to sort things out and get back up the table.  Can we bounce back against Lanhydrock next week?  Watch this space…..