Saltash St Stephens provided a familiar venue for several Gunnislake players, with the club having made a number of loans to the hosts during the season, including four players in our recent blank weekend.  So a friendly match was in prospect as Gunnislake sought to lift themselves from the bottom of the  table, a spot occupied until quite recently by Saltash St Stephens.

However, two things led to all cunning plans going astray: an inept batting performance and the presence of Jamie Hine, who is apparently averaging 133 this year, while playing for Saltash St Stephen’s first team.  And so after Gunnislake crawled to 86 for 9 in the allotted forty overs, Jamie Hines rattled up 74 not out in a mere 10.2 overs.  Blink and you could have missed it!

An explanation of the scorecard

Stephen Lees: pulled straight to square leg, out without troubling the scorers.

Ian Mill: leading edge to mid-wicket, out for an almost respectable 13.

Kevin Beare: missed a straight one, unless you count a slight deflection off his pads, to be bowled.

Mark Everett: a bit slow, but the best by far!  25 accumulated while there was carnage around him.

Dinish Thirupuvanarajah: smashed one straight back to the bowler; genuinely unlucky, but still a duck.

Jacob Crocker: forgot to keep it on the ground, again; off the mark, but only by one.

Dean Organ: beaten for pace, out for three.

Sylvan Pook:  run out, called by a nameless colleague for a single but sent back too late.

Dave Warner: an epic nine not out.  Perhaps benefitting from some change bowling towards the end?

Paul Lees:  amazingly not out, despite missing quite a few (he’s a bowler really).

A mention is despatches for Matt Willcocks of Saltash St Stephens, who took five wickets for 24 runs. 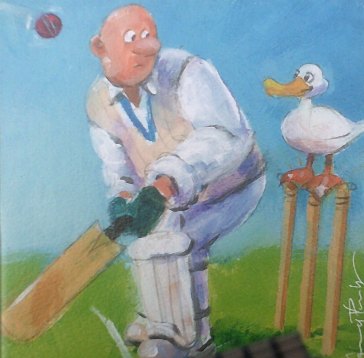 Meanwhile did you hear the joke about the nervous husband who’s wife was pregnant?  When she went into labour he accidentally got the wrong phone number and kept ringing the local cricket club rather than the hospital.  He was getting regular updates, and was surprised and delighted to find he was the father of twins: two out.  Later on he was ecstatic to hear he was the father of quintuplets, but on a third call, he was advised they were now all out and the last one was a duck!